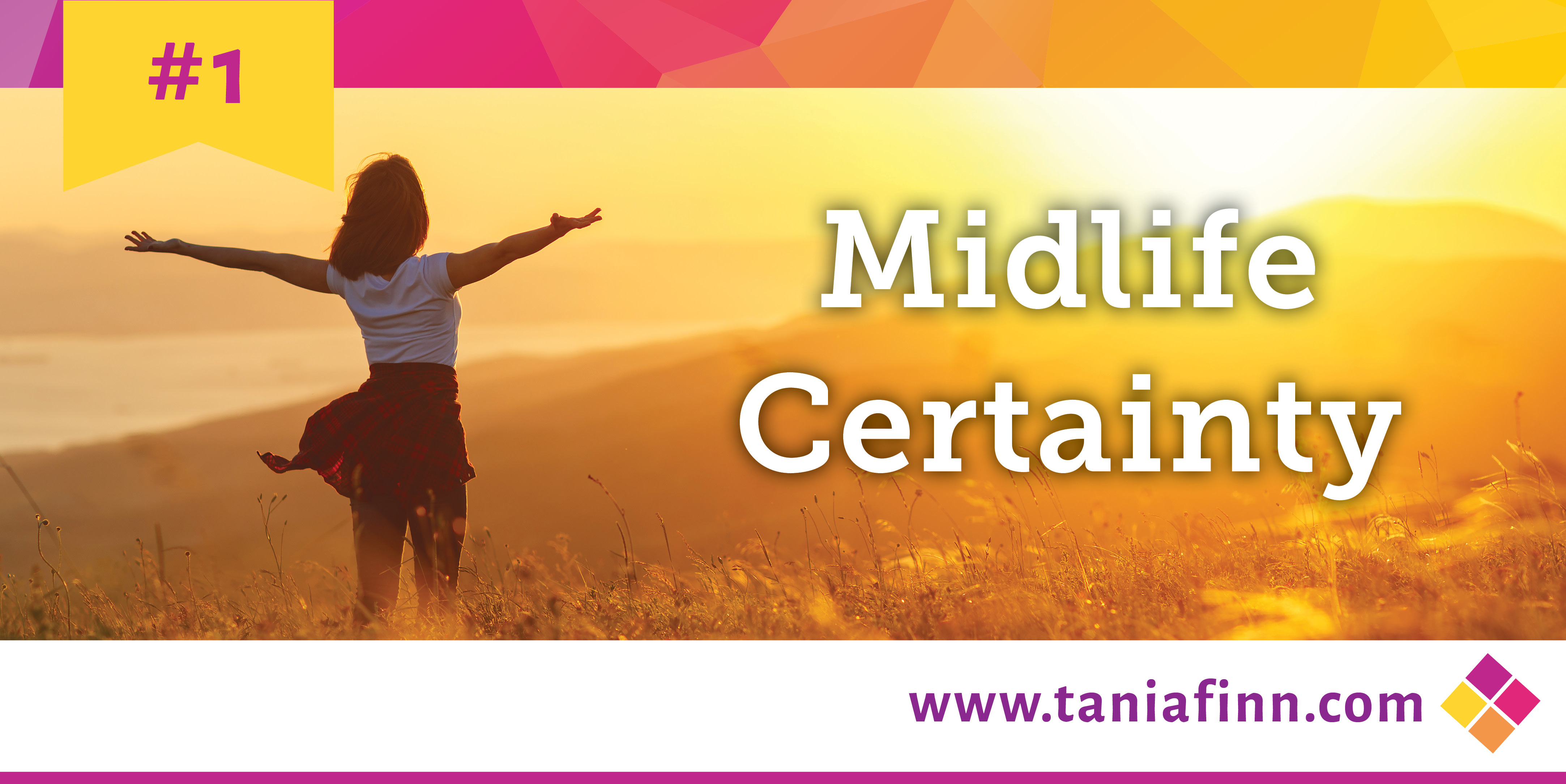 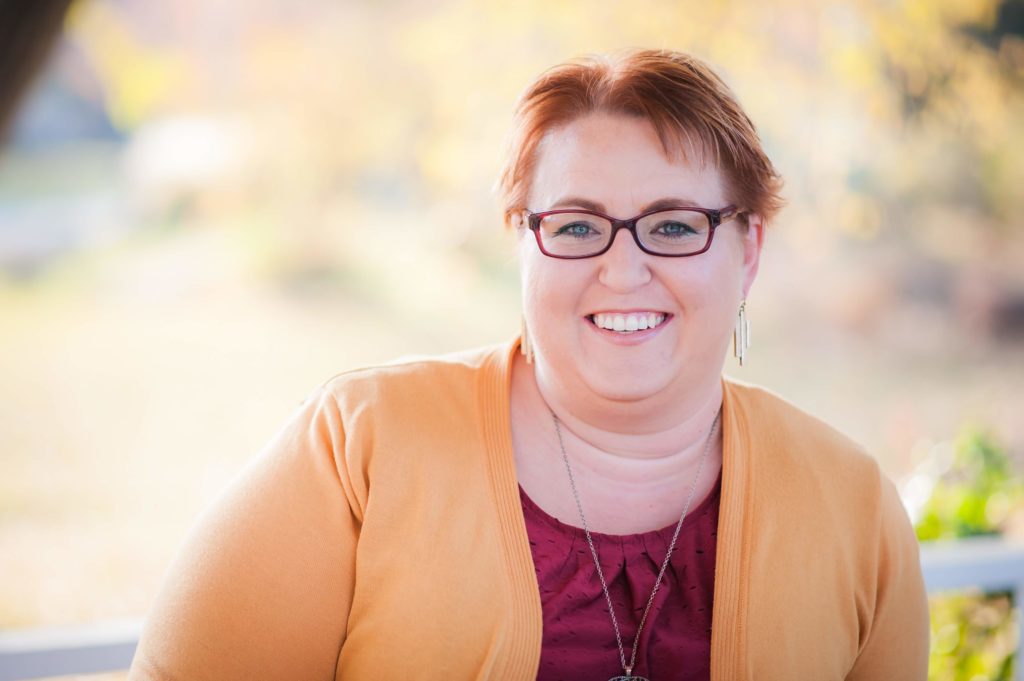 The year of 2017 brought me a lot of learning and growth opportunities.  The first few months had been pretty financially taxing. This was augmented with managing the challenges of running my own graphic design and marketing business, serving in various church callings, cleaning up from a house flood, and balancing the adventures of being single.    In the midst of this, I hit a little bit of a wall.

Throughout August and September of that same year, I had repeatedly felt that I was moving into a different season of my life.  I recognized it as a prompting from the Spirit, but I didn’t really know what that “new season” was going to look like.

In October, just three weeks shy of my 37th birthday, I was still trying to figure out what the Lord needed me to do next.  I had been praying to receive more insight or clear direction into this new season of my life, but it wasn’t coming as fast as I would have liked.

One morning as I was pondering,  I had a thought come to my mind, “You are having a midlife crisis.”  The thought felt so foreign and wrong that it caught me off-guard. I said, “Me? A midlife crisis?  No way!” I could immediately tell, because of how it made me feel, that the thought wasn’t from God, but it still bothered me.

Even though I knew it wasn’t true, the statement plagued me for the next 24 hours.  I could tell that the adversary was trying to convince me that it was true. I even acknowledged that from an outside perspective, some of my recent life changes might look like a midlife crisis, but in my heart I knew that wasn’t what was happening.

I had associated what I knew of a midlife crisis with a time where someone would go buy a new car, change their job, get a motorcycle, move to a different house, or display a drastic lifestyle change.  These changes are often rooted in the fear of missing out on things earlier in life or the fear of not having those same things in the future. I was curious how the world defined a midlife crisis, so I looked it up.  The Oxford Dictionary defines a midlife crisis as “an emotional crisis of identity and self-confidence that can occur in middle age.”

I was feeling a little unsure of what to do with my life.  I knew something needed to change, but I didn’t know what.

I shared my thoughts with a friend that night, and the end of our conversation, I had this realization: “I actually feel that the opposite is true.  Of all the times in my life, this is the time I have felt the most confident about who I am and what my mission is on earth.”

Right then, I knew there was no way I was having a midlife crisis.  I had never felt MORE sure of who I was and MORE confident about myself.  And isn’t that what the first 37 years should be all about? As God designed, those years should have been all about–navigating life’s ups and downs, and along the way, discovering my identity and strengthening my self-confidence.

With that knowledge, a feeling of peace rushed over me as those truths settled in my heart and mind.  This experience gave me even more certainty about the things of which I was already certain. I wasn’t having a midlife crisis.  I was experiencing midlife certainty.

I was reassured by the spirit that I already knew I was a “daughter of a Heavenly Father who [loved] me and I [loved] Him.  I already knew that God had a plan for me. And even though the path wasn’t clear right now, I was right where I needed to be, heading in the right direction.

I believe there are transition points in our lives when we wonder if we are doing the right thing, if we are being true to who we really are, and if our Father in Heaven is pleased with our progress.  At a time when the world would tell you that the transition puts you in crisis, I would say that you are actually in certainty.

What does it mean to be certain?  Sister Linda K. Burton recently gave a general conference address where shares her thoughts of discovering “certain women” in the scriptures:  “I have read and passed over the seemingly unremarkable expression ‘certain women’ numerous times before, but recently as I pondered more carefully, those words seemed to jump off the page. Consider these synonyms of one meaning of the word certain as connected to faithful, certain women: ‘convinced,’ ‘positive,’ ‘confident,’ ‘firm,’ ‘definite,’ ‘assured,’ and ‘dependable.’ ” [1]

Think about it.  At the midpoint of your life, what things ARE you certain about because of the life experiences you have had?  How many primary lessons and sacrament meeting talks have you sat through? How many times has Holy Ghost borne witness of the truthfulness of what you are hearing?  As you have studied the scriptures, what principles have you learned that have sunk deep into your soul? How has the Savior’s life changed yours? What do you really know, for certain? 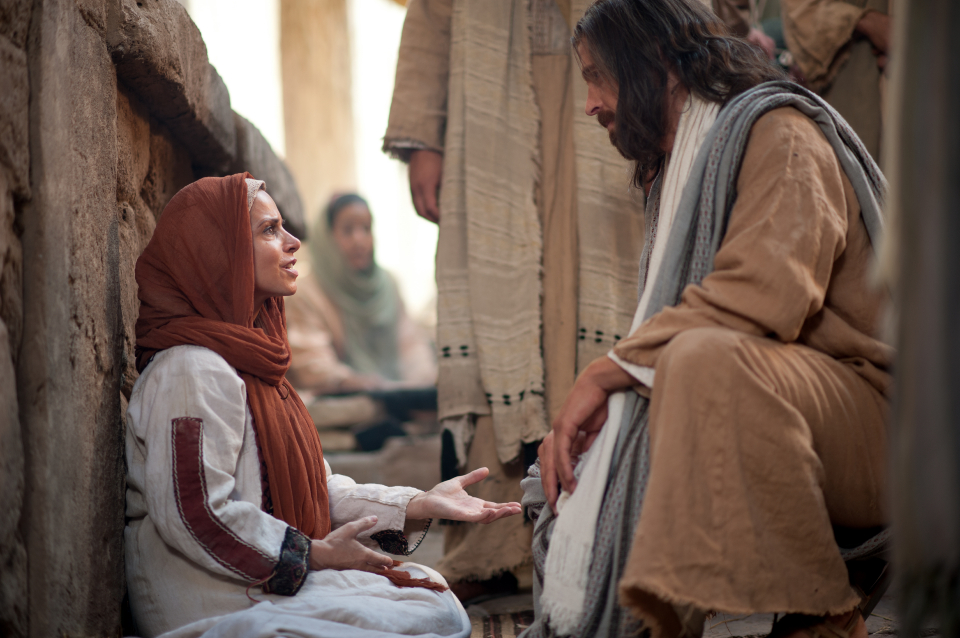 Certainty requires faith centered in Jesus Christ and knowledge of things that are true.  Through prayer, we can align our will to that of the Father and gain the confidence that His desires are our desires.[2]

Can you feel certainty when uncertainties arise? Absolutely.  Bruce C. Hafen wrote: “If we are not willing to grapple with the frustration that comes from facing bravely the uncertainties we encounter, we may never develop the kind of spiritual maturity that is necessary for our ultimate preparations.” [3]

Even negative life experiences can give you certainty.  You can know that you don’t ever want to do that again, or that something doesn’t actually bring you the happiness you thought it would.

Instead of questioning everything you know, just rely on what you know for certain.  Have faith in it. Trust in it. Let it be your firm foundation instead of a sandy base.  Choose to embrace it instead of reject it. Use it as a tool to combat the false beliefs that bombard you each day.

Who is really in crisis?

In reality, do you know who is in crisis?  It isn’t you. It’s Satan. His kingdom is threatened anytime someone knows who they are and is confident in acting on what they know to be true.   The Oxford Dictionary defines a crisis as “a time of intense difficulty, trouble or danger.”

Is Satan in intense difficulty?  Every step you take closer to God by following the prophet, reading your scriptures, going to the temple, and any other righteous choice makes it more difficult for Satan to get you to side with him.

Is Satan in trouble?  He is already in trouble because we have a body and he doesn’t.  “All beings who have bodies have power over those who have not. The devil has no power over us only as we permit him” [4]

And is Satan in danger?  For sure.  He is in danger because your influence and testimony will only help and bless thousands of others to come unto Christ, “make and keep sacred covenants, and enjoy the blessings of exaltation.”[5]

No wonder Satan wants us to believe that we are in crisis.  He wants us to be “miserable like unto himself.” [6] Our perceived crisis is really his crisis.  And because of that, he seeks the misery of all mankind. Misery loves company, and apparently so does crisis.

And Satan is on a time clock.  Revelation 12:12 teaches, “for the devil is come down unto you, having great wrath, because he knoweth that he hath but a short time.” 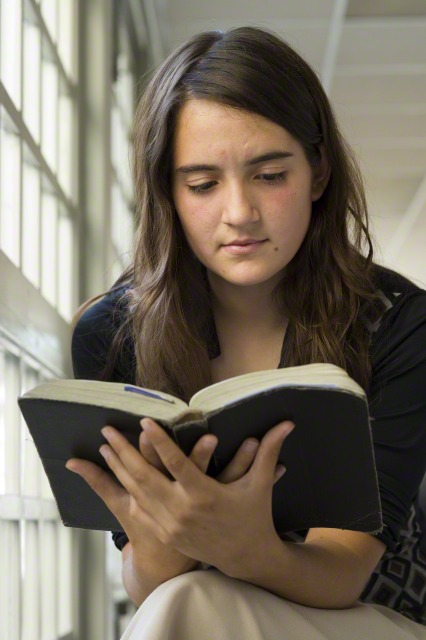 James E. Faust reminds us, “I think we will witness increasing evidence of Satan’s power as the kingdom of God grows stronger. I believe Satan’s ever-expanding efforts are some proof of the truthfulness of this work. In the future the opposition will be both more subtle and more open.  It will be masked in greater sophistication and cunning, but it will also be more blatant. We will need greater spirituality to perceive all of the forms of evil and greater strength to resist it.”[7]

And how do we attain that greater spirituality mentioned?  We spend time in His holy word, heed the promptings of the Holy Ghost, continue drawing closer to God, make and keep our covenants and stay focused on those things of which we are certain.  Truth gives us the power to dispel the darkness (D&C 50:25).

Elder Faust provides us with hope: “All who come unto Christ by obedience to the covenants and ordinances of the gospel can thwart Satan’s efforts.” [8] 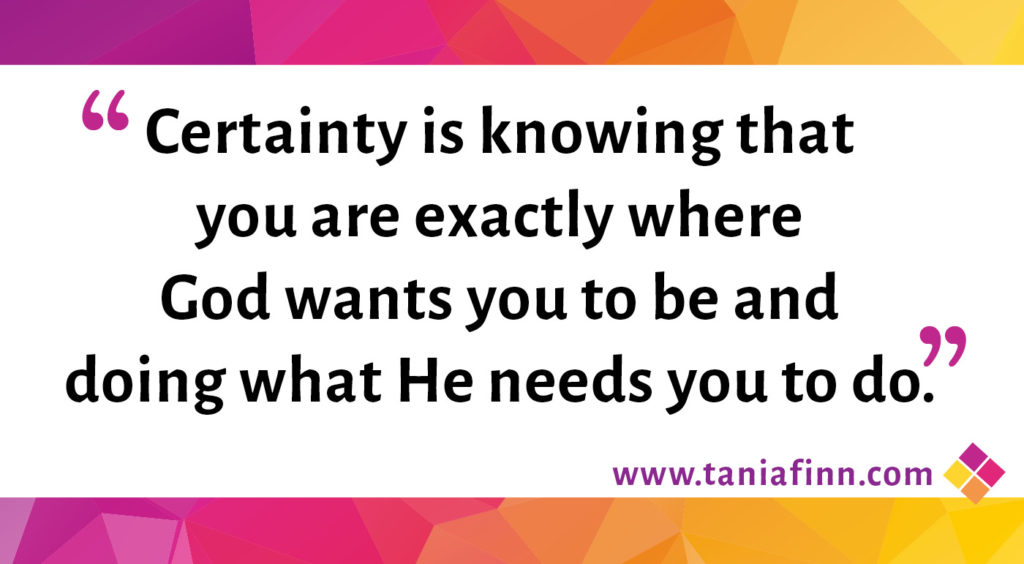 Having certainty doesn’t mean that we must know and understand every detail.  Certainty is knowing that you are exactly where God wants you to be and doing what He needs you to do.

The moment I realized that I was in certainty and not crisis, it gave me the courage to continue moving forward in the direction I was already heading, even though the destination wasn’t in my view.  I recognized that Satan wanted to halt my progress by telling me that either I wasn’t going anywhere, or I was headed the wrong way. But the opposite was true.

By choosing to staying on the path, I’ve been able to watch this journey unfold in ways I never would have imagined.  With each step, I continue to learn more truths that strengthen my testimony of the Savior and encourage me to put greater faith and trust in Him.  I know it is through Him, who is “the way, the truth, and the life”[9], that we find certainty. 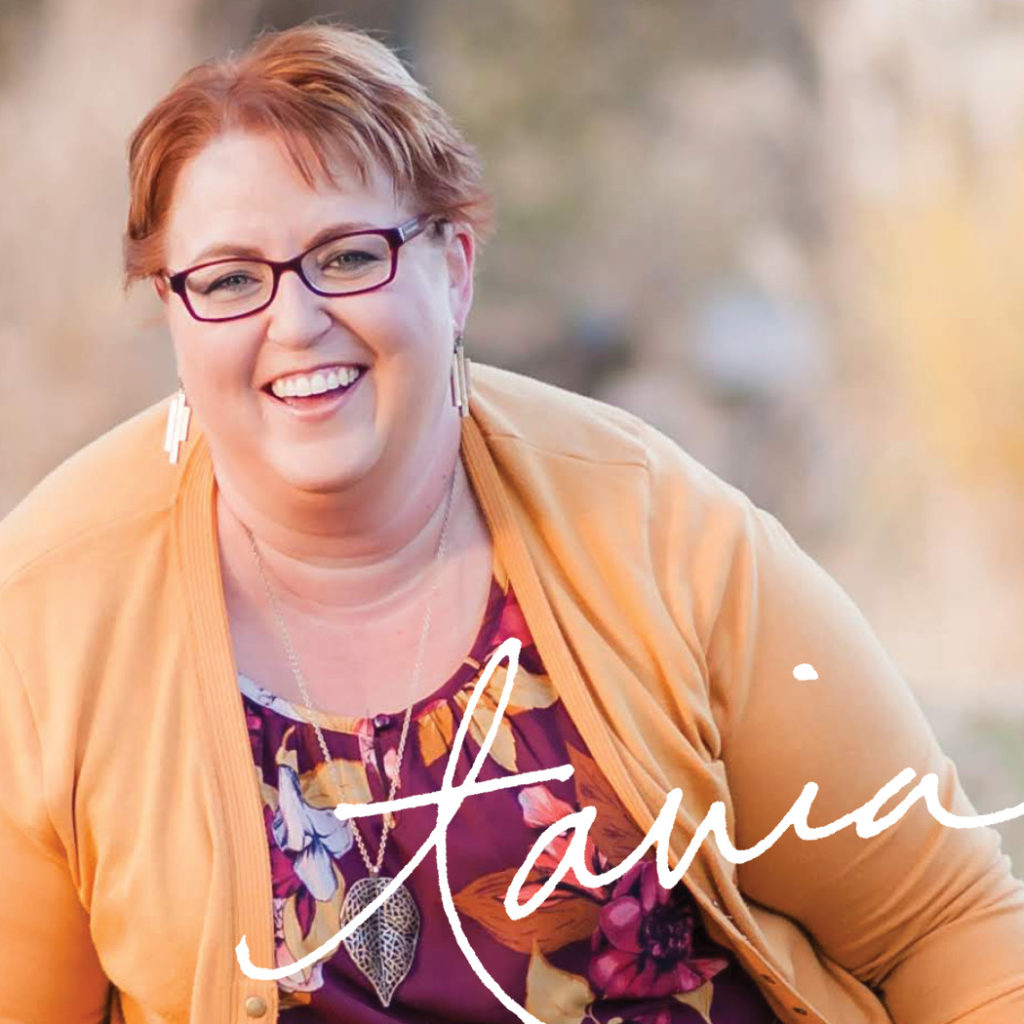